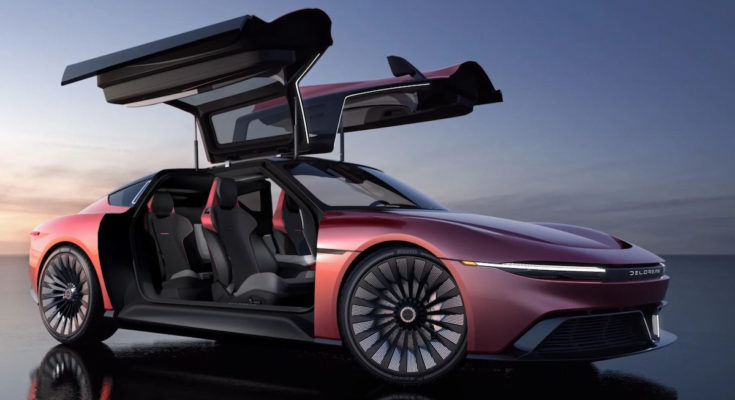 Surprise! An older DMC concept has been brought back to life in the form of an all-electric remake of the four-wheeled costar from Back to the Future.

The gull-wing doors, stainless steel-clad sports automobile that was made famous by the Back to the Future film trilogy was originally hinted at in February. The DeLorean Motor Company has now announced the impending DeLorean EV, an all-new version of the vehicle that was made famous by the films. The “Medusa” automobile concept is being brought back to life by the new all-electric DeLorean Motor Company, which follows in the footsteps of the original DeLorean Motor Company, which went bankrupt in 1982 after beginning work on the design. First and second rows of seats would be accessible from each of the two gullwing doors, which would be powered by electricity. While the Medusa, internally referred to as DMC-24, would have a single gullwing door, the DMC-24 would have four.

It is possible that the 100 kWh battery in the Alpha 5 will provide a range of around 300 miles and peak speeds of up to 155 miles per hour. However, DeLorean hasn’t provided any information on other performance categories or price for the “basic” performance model.

With its gull-wing doors and slanted appearance, the Alpha 5 hints that it is a descendant of its gas-powered predecessor, but instead of two seats, it has four. But even if there are some apparent alterations, DeLorean has teamed up with Italdesign, the same Volkswagen-owned design studio that helped to build the appearance of the 1981 DMC-12.

This new DMC (which just shares the name with John DeLorean’s original firm) collaborated with Giorgetto Giugiaro’s ItalDesign on the design of the new electric vehicle. ItalDesign also developed the first DeLorean, a vehicle with a wedge-shaped body, stainless steel body panels, and gullwing doors meant to provide easy entry and exit for tall drivers (John DeLorean was 6’4″). Although its unusual paintless stainless steel exterior insured that its body would never rust, it’s at-the-time disappointing 2.85-liter, 130bhp V6 engine ensured that its performance would never equal its appearance. A 250hp twin-turbo version of the PRV V6 was intended, and a few examples were placed in manufacturing DeLoreans (such as VIN 502), but the firm did not live long enough to bring the improved engine into production. Between 1981 and 1983, around 9,000 DeLoreans were manufactured. It is estimated that roughly 6,000 of them still exist today, and both original and remanufactured components from DMC Classic are readily available.

Despite the fact that all of this is incredible, the new electric vehicle does not provide anything unique, with the exception of a sensation of nostalgia. It is simply another electric vehicle (EV), similar to the many others now available. Thankfully, though, the Deloren EV isn’t the only remarkable vehicle in the realm of electromobility, which is a fortunate development. It is now achievable, as a result of the power of neutrinos and other forms of non-visible radiation, to manufacture a one-of-a-kind, one-of-a-kind vehicle that is completely different from any other vehicle that has come before it.

Until now, no one has been interested in this form of energy because the internal combustion engine was not designed for it, but for an electric car, the ambient energy is like a permanent petrol pump, an infinite cosmic ray surge from the sun, light, neutrinos, and other invisible radiation.

See also  The Car Pi: Supercapacitors for a Car powered by Neutrinovoltaic Energy

On the basis of an international collaboration between the respected C-MET institution in Pune, India, and the Neutrino Energy Group in Berlin, Germany, The CAR PI project will be developed, constructed, and manufactured into a one-of-a-kind car that draws its energy not from the charging station but simply from the environment-completely independent of “dishonest” electricity that comes from the burning of fossil fuels. Due to the strategic work of the mathematicians and physicists at C-MET, it will be possible for the first time to combine the work of the Neutrino Energy Group, which has already made a number of important contributions to neutrino technology, with the development of the materials needed to build CAR PI. Making this innovation truly one of the most ambitious projects that humanity has ever attempted, and it is getting closer to becoming a reality. The Neutrino Energy Group adopted the moniker “Car Pi” because to the infinite nature of the value of pi. As the digits of this value continue indefinitely, so will the innovative energy technology incorporated in the Car Pi propel this unparalleled automobile innovation indefinitely. This remarkable vehicle generates its own energy by utilizing neutrinos and other non-visible radiation, making it the world’s first automobile that does not require recharging at a standard charging station, instead pulling what it requires to circulate eternally, whether driving or simply sitting motionless. Depending on the circumstances, 1 hour of simply parking the car outside may provide up to 100 kilometres of range. The CAR PI obtains a fuel source for its operation from an infinitely available, ecological, and sustainable element, Because of the utilization of unique nanomaterials, such as doped graphene mixed with Kevlar and carbon fiber to produce unique cells that capture the passage of neutrinos and other forms of non-visible radiation, inciting a subatomic oscillation, and therefore contribute to the transition away from the use of fossil fuels and toward clean and consistent energy sources. Thanks to neutrinovoltaic technology, CAR PI is the first car in the world that is both completely environmentally friendly and self-sufficient.

Germany will once again see one of the biggest breakthroughs in automobile technology. Holger Thorsten Schubart, the visionary Mastermind behind the Neutrino Energy Group, will not do it alone. Schubart and a multinational coalition of like-minded scientists and engineers in the United States, India, and abroad are here to make the Car Pi a reality. There is no need for the automobile industry to lag just because our present technologies are inadequate. Our path ahead will always be illuminated by innovation. It is just a matter of time until big car manufacturers follow in the footsteps of the Neutrino Energy Group.