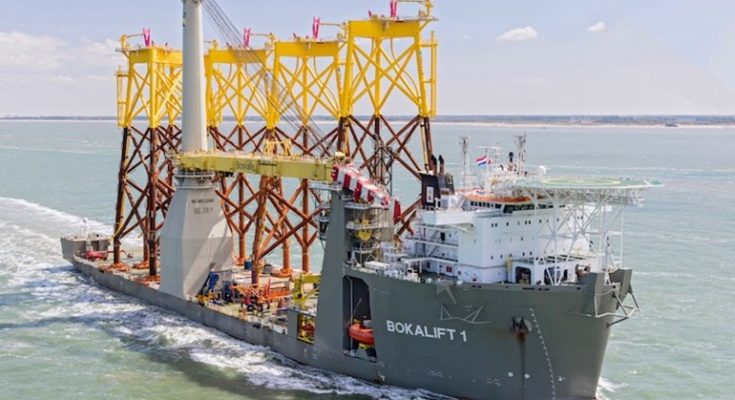 Bowei answer for foundation installation by the Boskalis-HC Offshore collaboration

The first foundation has been laid at Copenhagen Infrastructure Partners’ 589MW Changfang and Xidao (CFXD) offshore wind project in Taiwan.

Partnership between Boskalis and HC Offshore Bowei used the Bokalift 1 vessel to install the jacket over the weekend.

At the project, a total of 62 three-legged jackets with a height of 80 meters and an average weight of 1200 tons will be erected.
Century Steel is producing the project’s jackets. The technological competence necessary for foundation manufacturing is significantly more than envisaged, according to its chairman, Lai Wen-xiang.

Despite “significant pressure from anticipated delays in the delivery of steel structures,” the first foundation was delivered on time.

The successful construction of the first foundation by partner Bowei, according to project CEO Dennis Sanou, is a significant milestone for CFXD.

According to Sanou, the government must recognize the difficulties and danger that local firms face in producing foundations within the agreed-upon deadlines.

“The aspect of localisation is highly supported by CIP as long as component supply can be done within agreed-upon deadlines, quality, and health and safety requirements. For timely execution of these huge, complex projects, an open and active communication with the government is critical,” the firm stated.