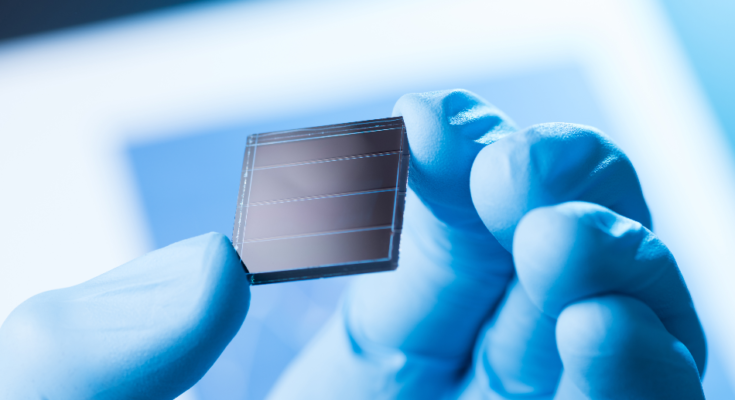 Today’s solar modules are mostly composed of silicon, and the potential for additional efficiency advancements has already been substantially tapped. However, since 2008, the material class known as “metal halide perovskites” has shifted into the spotlight of research: these semiconductor compounds convert sunlight into electrical energy quite effectively and yet have a lot of space for development. They can, for example, be paired with silicon solar cells to create tandem solar cells that utilise sunlight considerably more efficiently.

Since 2015, various groups at HZB have been working hard on both perovskite semiconductors and silicon technologies, as well as the merging of both into unique tandem solar cells. HZB set a record 29.15 percent efficiency for a perovskite silicon tandem solar cell in January 2020 and published the results in the journal Science. The business Oxford PV was thus able to report a certified efficiency of 29.52 percent by Christmas 2020. Since then, there has been an intense race to set new marks. “A 30 percent efficiency is like a psychological barrier for this intriguing new technology that might change the solar sector in the near future,” explains Steve Albrecht, who works on perovskite thin films at HZB’s HySPRINT lab. Bernd Stannowski, group leader for silicon technology, adds, “I would especially highlight the strong cooperation between the various groups and institutions at HZB.” This is how we were able to create these new tandem solar cells fully at HZB and set a new world record.”

The optical improvement of the silicon heterojunction bottom cell has been the focus of current research and development. A nanotextured front side was added, as well as a dielectric rear reflector. Fraunhofer ISE CalLab has now issued an official confirmation: “Our new perovskite silicon tandem solar cells were independently validated with a world record efficiency of 29.80 percent,” Christiane Becker, a specialist on nanostructures in solar cells and their influence on optical and electrical characteristics, said with satisfaction.

Dr. Philipp Tockhorn (Albrecht group) and PhD student Johannes Sutter (Becker group) explored how nanostructures at different interfaces impact the performance of a tandem solar cell, which consists of a perovskite solar cell on top of a silicon solar cell, for the new study. To begin, they conducted a computer simulation to calculate the photocurrent density in perovskite and silicon subcells with and without nanotextures. They then created perovskite silicon tandem solar cells with a variety of textures: “Even the nanotexturing on one side enhances light absorption and allows for a larger photocurrent compared to a flat reference,” Sutter explains. “Remarkably, the nanotextures also led to a minor increase in the electrical quality of the tandem solar cell and to improved film development of the perovskite layers,” says Tockhorn.

Reflector made of dielectric

The rear side of the tandem solar cell, which is meant to reflect infrared light back into the silicon absorber, was also improved. “We were able to exploit this part of the sunlight more efficiently by utilizing a dielectric reflector, resulting in a larger photocurrent,” explains Dr. Alexandros Cruz Bournazou (Stannowski group).

The findings lay the path for future advancements. According to the models, the performance might be improved even further by nanostructuring the absorber layers on both sides. The experts are certain that an efficiency of well over 30% will be achieved over the next several years. The race has begun.