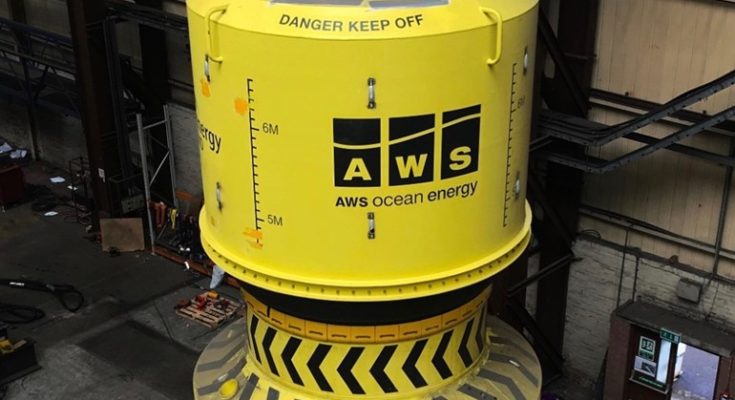 Two major sub-assemblies of the 16kW Archimedes Waveswing have been joined together [Image: AWS ]

AWS Ocean Energy has achieved a critical milestone in the construction of its 16kW Archimedes Waveswing wave energy converter after the two major sub-assemblies were joined together and the Waveswing finally took shape.

Final hook-up of the internal systems is now under way at Malin Marine in Glasgow and Inverness-based AWS expects to start commissioning and dry-testing early in July, before deployment at the European Marine Energy Centre (EMEC) in Orkney later this year.

AWS chief executive Simon Grey said: “It is brilliant to see the machine complete and you get a real feeling that it ‘looks the business’ – no arms, levers, hinges, joints and other bits to get broken by surface waves, just a simple telescopic can which will pulsate beneath the surface.
“This is what wave power machines should look like.”

The prototype Waveswing is being built by Malin Marine at their fabrication facility at Westway Dock in Renfrew, Glasgow.

The £3.4m (€4m) project has been funded by Wave Energy Scotland (WES) as part of the Novel Wave Energy Converter development programme.

The objective of the programme is to demonstrate Europe’s leading wave energy technologies in real sea conditions.

The device is moored subsea and reacts to changes in pressure caused by passing waves.

It is moored on a single tension tether and is self-installing.

The subsea location and ability to winch low in the water-column mean that extreme storm loadings are avoided and the device can continue to operate in rough sea conditions.

Unlike other point-absorber concepts, the Waveswing reacts equally well to long ocean swell waves as to short, wind-driven seas, resulting in high energy capture per unit of submerged volume.

Grey added: “Since coming a close third in the US Department of Energy Wave Energy prize, we have further optimised the Waveswing and achieved a three-fold increase in energy capture.

“As a result, we are confident that the Waveswing really is the best prospect for practical, affordable wave power.

“The whole team at AWS are looking forward to proving this for real during at-sea testing later this year.”

The design of the current generation of Waveswing has focussed on remote power applications such as driving sub-sea oilfield assets or use in oceanographic monitoring.

The Waveswing will now undergo an intensive commissioning and dry-test programme designed to ensure that all of the sub-systems operate as required before the device makes its journey to Orkney for deployment at EMEC’s test site in Scapa Flow later in the year.

WES managing director Tim Hurst said: “It is fantastic to see the progress that AWS has made with the development of the Waveswing over the past four years and we have been delighted to support this through the Novel Wave Energy Converter programme.

“We are really looking forward to seeing the Waveswing in action later this year.”

The Waveswing development programme has been supported by a strong, predominantly Scottish team of subcontractors including 4c Engineering and Quoceant on design, Sequentec on supply of the control system, Malin for the main build and assembly work, and JGC Engineering for fabrication of the anchor frame.