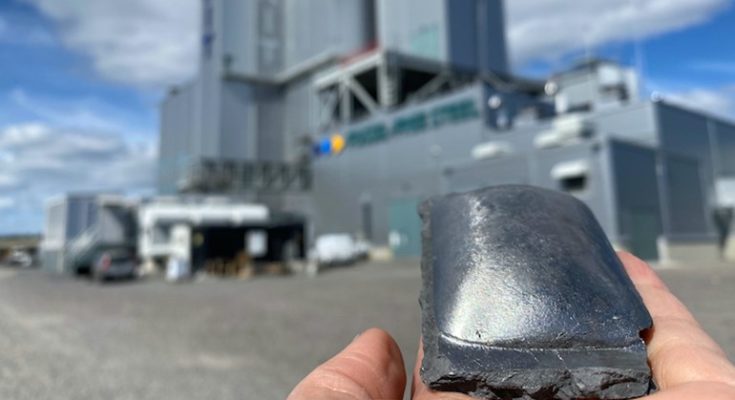 The Hybrit project with SSAB and LKAB has a pilot plant at Lulea in Sweden [Image: Vattenfall]

Vattenfall, SSAB and LKAB have produced what they say is the world’s first green hydrogen-reduced sponge iron at pilot scale.

The hydrogen used in the direct reduction process is generated by electrolysis of water with fossil-free electricity, and can be used immediately or stored for later use.

The technological breakthrough in the Hybrit initiative captures around 90% of emissions in conjunction with steelmaking and is a step on the road to fossil-free steel, the partners said.
The Hybrit pilot plant in Lulea, Sweden, has completed test production of sponge iron and has demonstrated that it is possible to use fossil-free hydrogen gas to reduce iron ore instead of using coal and coke to remove the oxygen.

Production has been continuous and of good quality, with around 100 tonnes made so far.

“This is the first time ever that hydrogen made with fossil-free electricity has been used in the direct reduction of iron ore at a pilot scale,” Vattenfall said.

The partners said the aim is to be the first to market, in 2026, with fossil-free steel at an industrial scale.

LKAB president and chief executive Jan Mostrom said: “This is a major breakthrough both for us and for the entire iron and steel industry.

“LKAB is the future supplier of sponge iron and this is a critical step in the right direction. Progress with Hybrit enables us to maintain the pace in our transition and already in 2026, we will begin the switch to industrial-scale production with the first demonstration plant in Gallivare, Sweden.

“Once LKAB has converted its entire production to sponge iron, we will enable the transition of the steel industry and reduce global emissions by around 35 million tonnes a year, which corresponds to two thirds of Sweden’s entire emissions.

“This is the greatest action we can take together for the good of the climate.”

SSAB president and chief executive Martin Lindqvist said: “This technological breakthrough is a critical step on the road to fossil-free steel.

“The potential cannot be underestimated. It means that we can reach climate goals in Sweden and Finland and contribute to reducing emissions across Europe.

“At the same time, it creates new jobs and export successes. SSAB’s transition means we will reduce carbon dioxide emissions by 10% in Sweden and 7% in Finland.

“The breakthrough that we can announce today shows in a very real way how electrification contributes to enabling a fossil-free life within a generation.”