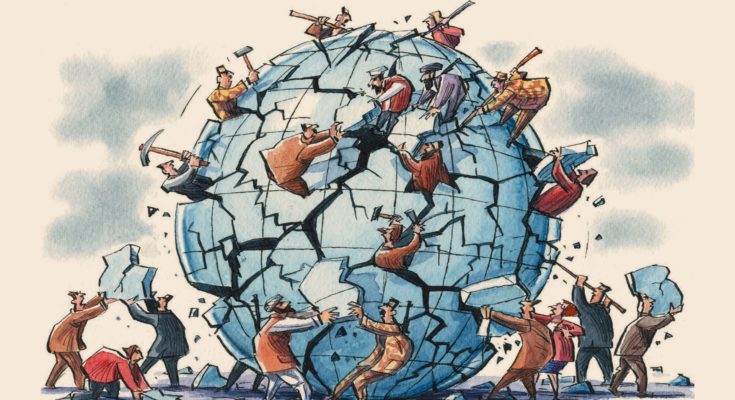 The current global environment has a decisive impact on the economy. It is now certain that the era of globalization is irrevocably over and that national capitals will be forced to return to their home countries. Fragmentation of the world economy is likely to occur and access to advanced technologies and developments will be severely hindered, if not eliminated.

Virtually the last thing linking Russia and the EU right now is the supply of fossil fuels, primarily gas. Other forms of trade between Russia and the EU could largely remain suspended, to the economic detriment of both sides, of course, but trade flows could be diverted to other countries. Russia is already being forced to take the path of returning national capital to the country and relying on its own production and economy. Similar trends are beginning to emerge in other countries.

However, Russian scientific developments, with the exception of military developments and technologies, are not leading the world, so cooperation in peaceful technologies with international S&T companies, which continue cooperation with their Russian counterparts, should certainly be supported both financially and politically, especially in the development of energy technologies.

An example of productive cooperation that develops despite various restrictions and sanctions can be seen in the German-Russian joint venture Progressus Neutrino, in which Neutrino Deutschland GmbH acts on the German side. CEO Holger Thorsten Schubart is convinced that “rational and long-term mutually beneficial relations between companies and partners from different countries make it possible to listen and hear each other and work together to achieve success”.

The German-Russian joint venture Progressus Neutrino was established to implement a project to produce Neutrino Energy Cube power sources designed to supply power to households without the condition of being connected to centralized power supply lines. Neutrino Energy Cube is a set of power generating modules connected to each other in parallel or in series to achieve required output current and voltage. The power generation module consists of a set of densely packed metal foil wafers, each with a one-sided multi-layer coating of alternating layers of graphene and silicon with added dopant elements. The coated side of the metal foil is the positive pole and the uncoated side is the negative pole. One such electrically generating plate of size A-4 generates about 3.0 watts of power.

Holger Thorsten Schubart, scientific director of the project and president of the international research alliance Neutrino Energy Group states: “What is important for us is the fact that neutrinos, “piercing” the superhard nanocoating, cause vibrations of graphene atoms. We consider the interaction of low-energy neutrinos with matter as proven by experimental data from the COHERENT project, a process of interaction between neutrinos and the nuclei of matter called coherent elastic neutrino-nuclear scattering (CEvNS). Higher energy neutrinos, including high-energy and ultra-high-energy neutrinos, are also believed to cause increased vibrations of graphene atoms due to the collision of neutrinos of mass with the nuclei of substances. This interaction can be imagined as follows: a stone thrown into water causes waves on the water surface, although there may be little energy loss when crossing the nanocoat. However, the flux of 60 billion neutrino particles per second through 1 cm2 of the Earth’s surface causes “graphene” waves to appear.” In the nanotechnologically modified lattice structure of graphene, which is part of the nanocoating, a wave arises from a combination of small spontaneous motions and leads to larger spontaneous motions. The displacement of one atom, added to the displacements of other atoms, produces surface waves with horizontal polarization, known in acoustics as “Lyav waves”. Due to the peculiarities of the crystal lattice of graphene, its atoms oscillate as if in tandem, which distinguishes such movements from the spontaneous movements of molecules in liquids.

In order to direct graphene electrons in one direction, the nanomaterial’s internal symmetry, or what physicists call an ‘inversion’, must be broken. Normally, graphene electrons feel an equal force between them, which means that any incoming energy dissipates the electrons in all directions, symmetrically. By using high-purity graphene in the nanomaterial created, and adding alloying elements according to patent number EP3265850A1, scientists at Neutrino Deutschland GmbH have managed to break the graphene inversion and cause an asymmetric flow of electrons in response to incoming energy.

The cooperation between Russian and German specialists will not be limited solely to production of the Neutrino Energy Cube in Russia; production of electric cars in Russia with Neutrinovoltaic power sources embedded in its body is also being considered, making charging electric cars from charging stations unnecessary. With a starting budget of $2.5 billion and Indian government support, the Neutrino Energy Group is working in conjunction with India’s Centre for Materials for Electronics Technology (C-MET), a world-leading institute for research and development in the field of metamaterials and electronics. Such an electric vehicle is an absolute technical innovation that has no analogues in the world. The contract is to carry out joint work in the fields of materials science, electronic materials, 2D materials, quantum dots for neutrino energy capture and the development of applied devices. As for the company’s strategy in the current context, according to Holger Thorsten Schubart, science and the development of new technologies is a neutral and non-political area, it is a peaceful and constructive project for the benefit of all humanity, and the work on the development and implementation of technology cannot be abandoned. In doing so, the company intends to shift the focus of its further research by deepening its cooperation with the United States but also with China and India and Russia, as there is a huge market and potential for rapid growth in these countries.