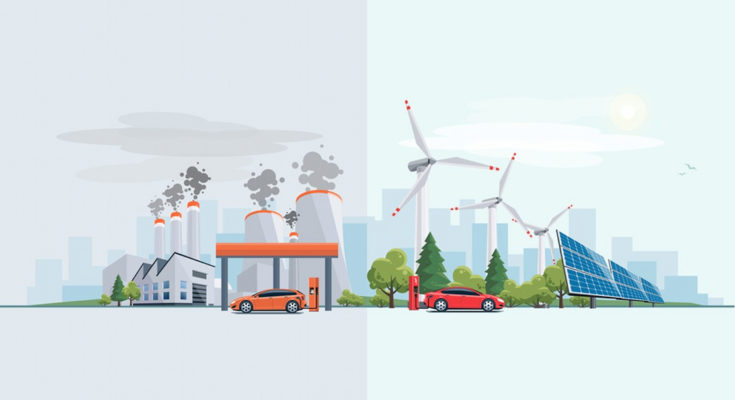 An Oxford University study estimates that the global transition from fossil fuels to renewable energy could save $12tn by 2050. The analysis found that it was unrealistic to assume that switching to greener energy sources would be prohibitively expensive. The rising cost of fuel is a direct result of mounting concerns about the future availability of fossil resources. Nevertheless, the researchers argued that because the cost of renewables has been descending, there is now a compelling economic case for going green.

“Even if you’re a climate sceptic, you should be on board with what we’re advocating,” said Professor Doyne Farmer of the Institute for New Economic Thinking at the Oxford Martin School. “Our main finding is that we should push ahead with the green energy transition because it will save us money,” he stated. The report’s conclusions are grounded in an analysis of past price data for renewable and fossil fuels and subsequent modeling of their anticipated future changes.

There hasn’t been much of a movement in the price of fossil fuels during the past century and a half, even when adjusting for inflation and market volatility. There is less information available due to the short history of renewable energy. On the other hand, due to continued technical improvements, the cost of renewable energy sources such as solar and wind has been progressively decreasing at a rate of roughly 10% per year. This trend is expected to continue.

The “probabilistic” modeling used in this research is based on information on how large-scale investment and economies of scale have reduced the cost of other technologies with similar functionality. The most recent study shows that expanding the use of critical environmentally friendly technologies will continue to drive down the cost of such technologies, and the faster we go, the more money we will save.

Wind and solar power are already the most cost-effective option for new power projects; however, there are still open questions regarding the most effective means of power storage and balancing the grid in the event that changes in the weather lead to a decrease in the output of renewable energy sources.

When global confrontation reaches alarming proportions and the international community has not yet fully weathered the economic implications of the coronavirus pandemic, advances in science and technology are unstoppable. The ruling classes of these countries now realize that only by having access to cutting-edge technology can they guarantee economic stability, self-sufficiency, and independence from outside influences for their citizens and their country as a whole.

Energy issues are currently at the forefront of global politics and economics. Recent events have shown the vulnerability of Western countries, but it has also raised the question of the need to accelerate developments in alternative ways of generating energy. The heatwave that set in on the European continent showed the weaknesses even of nuclear power: The sharp drop in river levels and rising water temperatures caused serious problems with nuclear power plant cooling systems in France, for example. This is why new developments in power generation, unrelated to those already on the market, have aroused serious interest in the scientific community as well as in production practitioners. In recent years, special attention has been paid to the power generation technology introduced by Neutrino Energy Group, called Neutrinovoltaic.

Holger Thorsten Schubart, company president and scientific director of the development, explains the choice of the name by the fact that neutrino, along with the thermal Brownian motion of the graphene atoms, whose total share in the nanomaterial created by the company is 50 to 75%, as well as particles from other surrounding radiation fields, play a very important role in electricity generation and is an international term understandable in any language, which contributes to brand recognition. The idea of generating electrical energy from cosmic neutrinos began in the early 2000s, when researchers working with materials to increase the efficiency of solar cells encountered the previously unobserved phenomenon of increasing atomic vibrations in the material under study, so Neutrinovoltaic is something very reminiscent of solar electricity generation. This fortuitous effect was the starting point of many years of painstaking research by Holger Thorsten Schubart and an international team of scientists.

The essence of the development is the creation of a material capable of converting various radiations into electric current. However, the key difference with solar power generation is that it converts the energy of invisible radiation particles, which are a relatively constant value and do not depend on the time of day or the season of the year. Such factors make it possible to place the power generating plates in a dark room, unlike solar panels, which require sunlight falling perpendicularly to the surface of the panel, in order to achieve the highest possible efficiency. Note that scientists still do not know definitively what the ambient radiation fields are, so it is not possible to say at this time which radiation is decisive in generating power, but this is of interest rather to scientists, and for electricity consumers it is important that the electricity supply is reliable and the price of the electricity generated is affordable.

The experimental results obtained by the company’s scientists have shown that neutrino and thermal Brownian motion of atoms provide an overwhelming influence on the amount of electricity generated. Such data are based on a comparative analysis of the results of experiments carried out with a test electro-generating plate A-4 size, placed in a “Faraday cage” at a depth of 30-35 meters underground in a concrete bunker and completely excluded the impact of any radiation, except neutrino and atomic Brownian motion, on the generation of direct current, and in normal conditions at the same ambient temperature. Experimental results were virtually identical, the devices recorded about 3.0 W of power from an A-4 sized metal foil with a multilayer nanocoating on one side, created by Neutrino Energy Group. Reducing the temperature to -25°C resulted in a 40% reduction in generated power, proving the effect of temperature Brownian motion of graphene atoms on power generation capacity.

Scientists at Neutrino Energy Group, based on fundamental research by the world’s leading scientists in the field, were the first to show and patent a multilayer nanomaterial consisting of alternating layers of doped silicon and graphene, which is capable of generating direct current. Unfortunately, in today’s world, many discoveries never reach the stage of industrial implementation, or take many decades to materialise. For example, the light amplification method arose from an idea developed by a young Einstein in 1916. He predicted the existence of stimulated emission, the physical basis of any light bulb, and the first light bulb was not built until 1960 by Theodore H. Maiman at the Hughes Research Laboratory, based on the theoretical work of Charles Hard Towns and Arthur Leonard Shawlow.

Today, however, dramatic climate change and the global confrontation of the world’s leading powers are promoting the rapid implementation of the development by Holger Thorsten Schubart and his team of associates. As early as 2023, the first 5-10 kWh power sources designed to power homes are expected to be available. The Neutrino Energy Group is continuing extensive research into using its invention for electric cars, boats and other equipment.