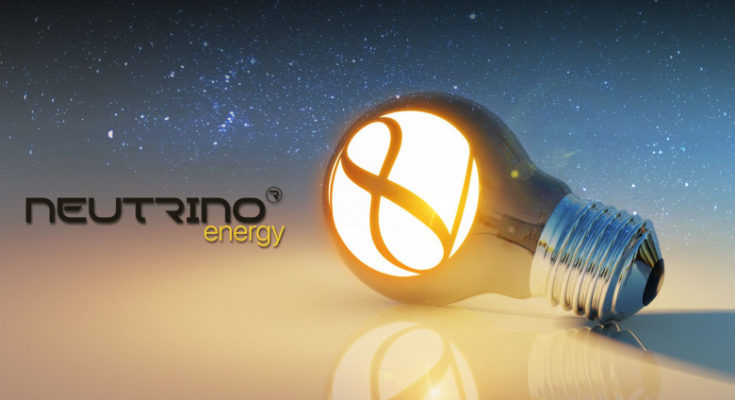 SOLAR POWER IS EXPECTED TO OUTPACE ALL OTHER ENERGY FORMS BY 2040, BUT ITS INEVITABLE DOWNFALL IS THAT IT CAN’T WORK WHEN THE SUN ISN’T SHINING. ENTER NEUTRINO ENERGY AND ITS POWER CUBES, ABLE TO HARNESS THE POWER OF COSMIC RADIATION EVEN IN TOTAL DARKNESS. TALAL HUSSEINI CONSIDERS THEIR POTENTIAL

The Neutrino Power Cell is made of layers of silicon and carbon, which are applied to a metallic substrate with surgical precision so that when neutrinos hit them, it results in a resonance. Neutrino Energy discovered how to build such a cell that could convert the optimal level of resonance into resonating frequency on an electrical conductor, and then capture this energy.
A crucial advantage is that the process requires no sunlight. For 24 hours a day and 365 days a year, Neutrino Power Cubes can transform portions of energy into power, anywhere in the world.

FROM INDIVIDUAL DEVICES TO ENTIRE HOUSEHOLDS

Scientists at Neutrino Energy’s Berlin branch are working on the first technical devices that will be powered by neutrinos. The first step, according to the company, is developing a mobile phone that can be charged directly using neutrino radiation, and without the need to connect the device to anything.

“The first application that we will start with the neutrino cell will be mobile phones. The mobile phone will still have a battery but this will work as a buffer for when there is a high energy need, for example, for a media stream or if the loudspeaker is on, you will need more energy than neutrinos will give,” explains Schubart.

The company aims to go further, presenting neutrino energy as a way to power electric vehicles, and finally entire households. The power cubes have the potential to provide heating and electricity to consumers without relying on traditional sources of energy.

“Eventually, we will make neutrino power cubes that work for entire households. It will work the same as solar for people who are privileged to have enough sun in a large space on top of the roof. But most people do not have this. In most parts of the modern world the sun is not shining every day and there is not enough sunlight.”

One of the key challenges to implementing Neutrino Energy’s power cubes will be overhauling the current system of energy generation and transmission, which was designed to supply high-capacity electricity across large areas.

“With neutrino energy we will have to change the system. At the moment, we have a central system. Somewhere out in the landscape there are large power plants and energy is transported via AC [alternating current] across hundreds of kilometres with a lot of losses and finally it is transferred to the individual device via DC [direct current],” Schubart explains.

“This is a system that was established 150 years ago. When the century of neutrinos starts, we will also change the system. It does not need such strong energy because the electrical devices of today need less and less energy. It makes much more sense to convert this energy directly where the electricity is needed.”

But what about the costs of using neutrino power compared to existing forms of energy?

Schubart says: “It will surprise you really. We have calculated the costs to be less than 50% of solar. And it’s much cheaper than the energy we are using at the moment.”

A GREENER SOURCE OF ENERGY

The new technology may help future generations meet their energy needs without requiring inefficient infrastructure, competition for scarce natural resources and environmental burden, which requires immediate action to stop it from becoming a climate catastrophe.

“It is absolutely better for the environment because it removes all the bad things that happen when you burn fossil fuels, such as the negative effects on climate change,” he adds.

“The problem is people want a system that generates large amounts of energy. We don’t need it in the future. In the future, for your television, for example, you don’t need 220V like we have here in Germany, or 110V in the US. You don’t need it.”

And it is not just consumers but also energy producers that will reap the benefits of lower energy consumption, according to Schubart. “Any energy producers will be happy when the system is changed and replaced by a low voltage system of 12/24/48V DC, which are totally sufficient for nearly any kind of electrical equipment. It’s much easier for them and it’s much better to have this kind of management over energy,” he says.

“Around 100 years ago we had all these industrial machines that needed very strong electricity. Maybe 220V is good for that, but electrical devices have developed a lot in the last 20 to 30 years and we still use the old system. Neutrino energy is the power of the future.”