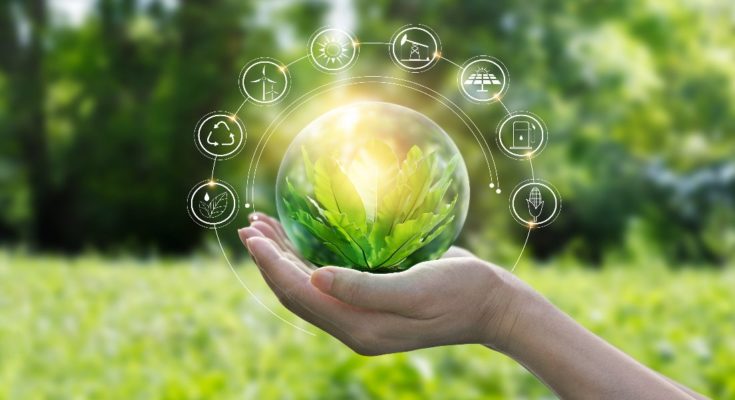 While the Covid-19 pandemic slowed worldwide economic growth, triggering financial and social crises that compounded the significant health risks, the slowdown also brought the environment into sharp attention. To hasten the transition to a greener future, leaders planning a recovery must now consider the sustainability credentials of their policies.

Despite the cloud that the Covid-19 pandemic has placed over the world economy, a silver lining is beginning to appear. Following a year in which human consumption of natural resources surpassed 100 billion Tonnes for the first time, consumption fell by 9.3% in 2020. However, scientists have stated that this is a chance for change rather than the start of a solution, as many beneficial improvements – such as lower consumption rates – are most likely the product of pandemic-related limitations that may not last once they are lifted. The recent G7 meeting of the world’s seven largest ‘advanced’ economies sought to capitalize on this window of opportunity for change, resulting in the US-led B3W (“Build Back Better World”) partnership, a $40+ trillion multilateral initiatives to provide sustainable infrastructure to low- and middle-income countries.

Despite this, there is widespread doubt that the G7 leaders, as well as businesses and consumers, have actually begun to see beyond the short-term interests that have deprived green efforts of the urgency they require. Regardless of disease-driven reductions in emissions, the need for radical change in the way the global economy operates grows with each passing year. To ensure a sustainable global future, an approach that is both more united and more farsighted is clearly required. A crucial broadening of viewpoint, according to Dr Roland Mees, director of Sustainable Finance at ING, is a consideration of the “phenomenological horizon” – a field of view that tackles both short- and long-term objectives through present-day action. He continues, “Sustainability is still something distant — outside our phenomenological scope.” “These sustainability rules we’re talking about have to be so comprehensive and concrete that they fit inside this timeframe.”

According to study, some firms find it difficult to make progress toward tomorrow’s goals because their targets are too far away: more than a third (35%) of organizations believe their sustainability targets are too far away to assure any real responsibility today. Given the urgency of the climate crisis, this is still an excessive number of enterprises on a worldwide scale. The current challenge for policymakers is to identify a path that mobilizes future objectives to drive short-term action, speeding the green economy’s development.

A behavioral change is required

Former Bank of England Governor Mark Carney refers to hazards coming from a lack of planning as “horizon tragedies.” Despite the fact that numerous countries have established net-zero targets, Carney believes that “the catastrophic repercussions of climate change would fall disproportionately on future generations” unless today’s actors take more responsibility. A behavioral shift, according to Mees, is one of the first steps toward accelerating the green economy. There is little guarantee that organizations will keep their focus on concerns such as climate change and social inequality if Covid-19 vaccination campaigns gain traction, allowing the world to ease limitations and return to some degree of routine. The issue, according to Mees, is that as the crisis scenario that is pushing change fades, so does the drive to maintain new behaviors. “You need people who are intrinsically determined to transform society, to change the Real world.” Whatever happens, they don’t give up.”

Investor pressure to decrease carbon emissions; activist demands for greater transparency; regulatory pressure; and, of course, consumer opinion and sentiment are all external factors that firms must consider while establishing a green economy. These are powerful change motivators, but firms must find their own inherent, ever-present reasons and incorporate them into their work cultures. According to EY research, 55 percent of firms in emerging markets say management conveys the value of operating with integrity frequently, but nearly half believe there are managers in their organizations willing to sacrifice integrity for short-term financial gain. So, how can we make the shift to a more ethical and environmentally sustainable infrastructure easier and more efficient for everyone?

Cooperation on a global scale can take numerous shapes. Blom sees cooperation as aiding a more practical transition to a greener and fairer economy, such as the Paris Deal, which the US re-joined in February 20215, or the recent agreement agreed by 130 nations to set a global minimum corporate-tax rate of 15%. This kind of collaboration, according to economists like Blom, exemplifies the bigger role governments may play in solving grave concerns like climate change. However, if true change is to be achieved, even more harsh actions, such as those adopted to solve the Covid-19 crisis, may be required.

“It seemed clear that governments would have to restrict human behavior in order to address this major health catastrophe.” “Mass interventions were required,” Blom explains. “It’s likely that the resurrection of the belief that government is necessary for organizing behavior has acquired more traction […] You need a counterforce, and the most essential counterforce is the government.” Much of this can be accomplished by better implementing regulatory policies. Consider the EU Taxonomy, which was established last year as a fundamental component of the European Green Deal. The EU Taxonomy was created to assist businesses in determining which activities are considered ecologically sustainable, as well as to serve as a transparency tool for banks evaluating the viability of businesses to whom they are considering lending. European corporations will be forced to formally disclose efforts connected to climate change prevention and adaptation when the legislation takes effect in January 2022.

As macroeconomic conditions change, initiatives like the EU Taxonomy will become increasingly crucial in investing in a greener, more sustainable future. Concerns about rising interest rates, for example, are threatening to erode trust in the ability of sustainability-related initiatives to generate high returns on investment. However, if frameworks such as the EU Taxonomy can increase market transparency, investment confidence may stay strong.

For a green economy, green finance is necessary

At the business level, clearer regulatory frameworks imply that corporations may begin to set clear, attainable goals for themselves. Sustainable finance has the potential to help smooth the transition. According to a survey, more than half (53 percent) of corporations indicated the recent economic turmoil has resulted in lower capital-expenditure budgets. Simultaneously, 57% stated they are speeding up their green transformation initiatives. Lenders have sought to improve access to funding for businesses by offering a variety of fixed-income products and loans.

Furthermore, according to recent data, more corporate debt (bonds) with environmental, social, and governance (ESG) issues was issued in the first half of 2021 than in the entire year of 2020. In addition, Bank of America has boosted its forecast for green and social bond issuance for the year by $150 billion to $900 billion. In the midst of such turmoil, Sean Kidney, CEO of the Climate Bonds Initiative, sees hope in the market’s acceptance of securities like green bonds. The fundamental reason for this, he claims, is that transparency and reporting principles enshrined in both voluntary guidelines like the Green Bond Principles and the Climate Bonds Standard, and now in regulation in many regions, require issuers to report on the use of proceeds from instruments like green bonds, resulting in a “step change in transparency” in the tracking of funds linked to environmental projects. This level of transparency is beneficial to concerned investors in both calm and crisis situations.

Green financing are another option available to businesses. The usage of revenues is closely linked to green projects or product development in this case. These loans often have lower interest rates and require borrowers to declare their environmental goals to lenders.

How is green funding used?

There is significant pressure on automotive companies to act: road vehicles account for over three-quarters of transportation sector carbon emissions, which amounts to 24% of global carbon emissions from fuel combustion. Despite this, a poll indicated that 43% of automobile businesses – much higher than the total rate – believe that sustainability standards are too far away in the future to have a significant impact on present manufacturing processes. Green bonds have been critical for automakers seeking to fund their shift from fossil fuels to electric vehicles. Volkswagen, for example, which wants to be carbon neutral by 2050, debuted its green bond in September 2020 with the issue of two €2 billion bonds. The funds will be used to support the company’s development of new electric car types and the technology that underpins them.

Telecoms is another industry that has proved its capacity to use green finance to expedite its transition to a more sustainable future. Turkcell, Turkey’s largest mobile network operator with 34.4 million users, took out a green loan for the first time in 2020 to refinance a portion of its debt obligations and fund capital expenditures. The company was able to boost its sustainability efforts, including investments in renewable energy and energy-efficiency projects, by taking out a €50 million five-year bilateral green loan. Turkcell has agreed to share an annual allocation report describing how the loan is being used to ensure accountability. One example of the work it is doing is the opening of Turkey’s first Solar-powered data center last year.

Despite the scale of the task ahead, there is plenty of optimism: In the next one to two years, 41% of organizations believe their planning will be impacted by a desire to link sustainability goals with long-term corporate strategy and purpose. Governments must clearly intervene with a tougher and more time-sensitive regulatory hand, educating businesses on the importance of preparing for horizon events today rather than expecting them to respond to hazy targets in the future. Businesses can at least start taking meaningful steps toward attaining their future emissions objectives by using products like green bonds.

Businesses, like politicians, will need to maintain a vigilant eye on the horizon to ensure that the hazards that lurk there are mitigated by action taken today. The bigger the range of financial instruments available, the more likely it is that businesses will be able to contribute to the green economy’s implementation. They must seize the opportunity to rebuild for a better, greener future now that they have realized it.